The Prude: Portrait of a Friendship

There’s a simple emotion reserved for such occasions as when a person you care about says something insulting about you to your face and on purpose. Since I can’t think of an adequate term for it, let’s refer to the resulting emotion as geranium. When my friend called me a prude the other day, he made me feel geranium.

From my American Heritage Dictionary of the English Language (1975)

My friend and I go way back. Now in our thirties, we met in our first year in high school. Our Civics teacher made us partners in a debating assignment and we immediately connected over profound fundamentals of teenage life, such as the fact that our first and last names have the exact same number of syllables. We’ve been friends ever since. As far as long-term, platonic friendships go, this is one of my more complicated ones: both of us headstrong and riddled with issues, our conflicting idiosyncrasies blow up in each other’s faces enough times a year to make me wonder if this genuine closeness is worth the often colossal inconvenience.

Last week, we wrapped up a hangout session the way we had started it: a quick conversation about nothing in particular to frame an afternoon spent doing various odd jobs in his apartment. The latter conversation eventually degenerated into a heated deadlock about whether or not it is acceptable for people our age to engage sexually with twenty-year-olds. Not people in their twenties, note. People born in 1997.

We occupied the predictable heteronormative slots on the debating spectrum: my friend identifies as male and argued that it is perfectly acceptable to hook up with twenty-year-olds, I identify as female and vehemently disagreed. The argument was neither sophisticated nor constructive: picture an unabashed display of idiocy involving two people who are utterly convinced of their moral supremacy. (It reminds me of this one incident, perhaps six or seven years ago, that he and I quarreled over whose family suffered the most during the Second World War.) ‘Have you spent a lot of time with twenty-year-olds recently?’ I ventured, to which he replied in the affirmative. ‘Then you’ll know how truly, immeasurably young they are,’ I argued. ‘No,’ he countered, ‘they’re actually adults.’

The adults
In spite of adages and provisos to the effect of ‘more age equals more maturity’, it is easy to sound condescending as an adult inferring that a younger adult is truly, immeasurably young. I have two sisters – one actual and one hand-picked for me, like a strawberry – who were born in 1995. One is gentle and wise, the other is bouncy and constantly questioning things. They are intelligent, talented, loyal, resourceful as motherfuckers. They also still possess a child-like uncertainty, especially around older adults; a timid layer of fragility sprinkled over otherwise adult-looking selves. The thought of an old geezer like my friend trying to have sex with either of them makes me want to unshelve my dad’s proverbial shotgun and pull the trigger myself.

It is possible that this is my problem rather than my friend’s. Perhaps I’ve spent so many years feeling protective over my sisters that I’ve forgotten another fundamental aspect of being in your early twenties: the freedom of beginning to be entirely your own, (hopefully) equipped to deal with creepy dipshits in whatever way will generate the least amount of emotional scarring.

My friend never heard these attempts at negotiating what I consider to be difficult emotional territory, however. He wasn’t really listening to me. Too preoccupied with riling himself up into an unwarranted state of agitation, he finally erupted: “Yeah well! YOU’RE A PRUDE!!!”

The prude
For the record, this isn’t the first time that my friend has called me a prude. It isn’t even the first time this summer. And let’s be real: although the word denotes a person supposedly considered sexually conservative (which is fine), no one uses the word as flattery. I was overwhelmed, at first, by geranium: how could he make such a negative remark about an aspect of my life of which he knows so little? 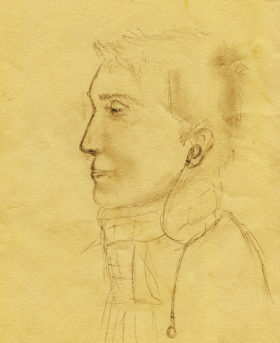 Portrait of my friend (2004), demonstrating my spectacular lack of artistic talent

Instead of getting upset, a valid case might be made for suggesting to people who cause you deliberate offence that they politely get in the bin. Why should anyone’s ego be subject to the fluctuating and often nonsensical opinions of others? If an unknown person was to insult me, I would undoubtedly feel the shock of unexpected humiliation but I wouldn’t have to navigate through the bafflement of any deeper level of hurt. Geranium is that special sting resulting from the offender being someone important.

But even geranium falls short here. My friend didn’t just insult me to my face and on purpose, the insult was sexual: a male passing a negative judgment on the perceived sexuality of a female. One might claim that it shouldn’t have to be a big deal – after all, women are judged on their perceived sexuality all the time. Surely one must know how to brush it off? The crux of it is that I brushed it off the last time I was called a prude, even though I didn’t like it, and the time before that. And the dozens of times before that, stretching all the way back into a girlhood in which the full weight of the word was essentially lost. This time, I reached beyond the gritty feelings of shame, embarrassment, and self-doubt (am I a prude?), until I found the emotion lodged most firmly at my core. I discovered so much anger there that I finally decided that no one will get to call me a prude again, no matter how invested I am in remaining on affable terms.

A quick Google search of the word ‘prude’ had me trawling through an assortment of definitions, some legitimate, some otherwise. I found Reddit posts written by women who had been called a prude by disgruntled lovers and were worried about their subsequent romantic prospects. I read articles in defense of sexual modesty and comments defending the use of the word (‘some woman [sic] ARE prude. Waiting 30 dates when the v card has already been used is just selfish. Especially if you make the woman a girlfriend.’) I scrolled through a bewildering array of images, from chastity belts to Hermione Granger. I finally landed on an article on The Date Report, in which writer Kelsey Stahler suggests that ‘using either prude or slut to describe [a] person simply whittles his or her thoughts, feelings and decisions down to a single derisive word.’

Deliberately insulting me in the middle of an argument was a classic effort at dominating the discursive space – annoying, but comparatively innocent. Insulting me in that particular way in the middle of that particular argument, however, takes the corn dog to a completely different ball park. By calling me a prude, my friend attempted to profile me sexually so that he could justify the fact that our opinions deviated. The subtext here is that I would arrive at certain conclusions regarding sex and sexuality, not because I am a reasoning, intelligent human, like him, but because I fall short of a set standard of his careful choosing. This is a brutal facet of misogyny, folks: when something important is at stake, men invariably know better. Why else would anyone throw around loaded misogynistic terms like ‘prude’ or ‘frigid’, if not to highlight the fact that a person (woman) just failed to concede to her inferiority as an arbiter of acceptable sexual behavior?

Relationships in the real world
A few weeks ago, my family and I experienced a heart-wrenching shock that gathered us at the hospital in the early hours of the morning. I messaged my friend from the midst of this trauma, his cyber presence a solid fixture at a time when I felt that I was about to unravel. ‘Let me just get dressed,’ was his reply, ‘I’m coming over.’ I was still trying to convince him to remain at home when he sent me a picture message of the hospital’s main entrance where he was waiting. He spent the following hours just sitting with us, unflinchingly sharing the grief and uncertainty of a family in crisis. As a person, he is generous, self-deprecating, resourceful as a motherfucker. As a friend, he is invaluable.

Of the people who read this, some will know me personally. Of those people, some may agree with my friend’s agitated assertion (several of them already have). From them, I would like to know: how can you tell? Is it the way I dress? The vocabulary I use? The way I choose to spend my evenings, or the fact that I openly problematize sex-related topics like pornography? Why is it so important to profile me anyway, especially when our interactions have never been sexual? And what makes you the goddamn expert? En kommentar till The Prude: Portrait of a Friendship