”Music, in my opinion, is ideally the exhaust for whatever you’re going through in life… Rather than the focus, it should be the outcome…” DT

Since my introduction to Devin Townsend a few years ago, he has become to me one of the more inspiring musicians in my lifetime, one of the greats one might say. Well that’s where my admiration puts him. His versatility and broad range raises him to a higher level than most. But to my knowledge he is, strangely enough, not as known as his skill should demand. Even so, this humble and hard-working individual still unleashes album after album, always surprising us with dynamic tunes and whimsical artistry. 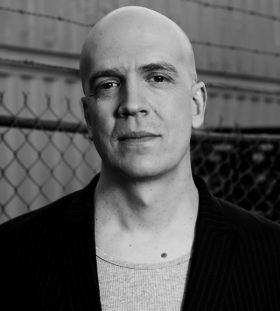 Which DT demonstrated again last 23rd February at Pustervik, Göteborg, where he delivered another great performance. Yes, I was there and I was euphoric. Expecting a focus on the latest album Transcendence, which would have been a blast, I was instead treated to a cavalcade of old and new, from Planet of the Apes, Supercrush! and Kingdom  to Stormbending, just to name a few. The concert left me quite giddy and expectant for what’s to come next from this virtuoso.

Devin Townsend appears to have lived and breathed music since a very young age, picking up his banjo at the age of five and ”upgrading” to the guitar at twelve. Later playing in several metal bands and even establishing a few, most notable DT’s flagship band Strapping Young Lad (before creating HevyDevy Records and dtb/dtp). At the age of nineteen he signed with Relativity Records, which would lead to his meeting with the legendary Steve Vai, who would offer him the role of lead vocalist for Vai’s Sex and Religion album. Accomplishing much early in his career, but feeling jaded and discouraged by his experience with the industry, would inevitably lead to DT’s founding of his own HevyDevy Records, The Devin Townsend Band and Devin Townsend Project. The rest is pretty much music history.

”I was becoming a product of somebody else’s imagination, and it was mixing with my own personality…” DT

Defining Devin’s style is not an easy task, since change seems to be a constant. A diverse blend of hard rock, progressive metal, ambient, and new-age are just some of the genres in his repertoire. He uses alternative guitar tuning, mainly open C, Open B and Open B Flat and a plethora of self taught guitar techniques. As a singer noted to have a vocal range of five octaves, he seems to effortlessly go from screaming to opera-esque singing and he’s equally varied in his songwriting, some of his most distinctive traits. As a fan of multitracking, his vibrant and layered production style has been compared to Frank Zappa and Phil Spector’s ”Wall of Sound”.

”I am influenced by anything that moves me” DT 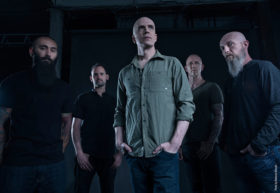 On the long list of DT’s influences you can find an eclectic mix of genres and groups. There is a certain proclivity for metal, but progressive, new age, broadway, orchestral and classical compositions are a few others. DT does list Ravi Shankar and Paul Horn as the two most important musicians in his life.

With over a dozen albums (not counting Strapping Young Lad, live albums, et cetera) across his career, it can be hard to know where to start, but in a sense, that’s what makes Devin Townsend such a mighty experience. Personally, I think you could simply take a plunge and you will likely land somewhere unexpected but exhilarating and fairly profound. But do not fret, I won’t leave you empty-handed without any direction, let me share a bit of my meager insight into a few works of this musical and lyrical genius:

Ziltoid the Omniscient, metal, comedy rock opera; The extraterrestrial sock-puppet Ziltoid travels to earth In search of the ultimate cup of coffee.

Casualties of Cool, ambient- alternative country blues rock; a traveler is lured to a sentient planet, which feeds on his fear. The traveler finds solace in an old radio and later an old phonograph.